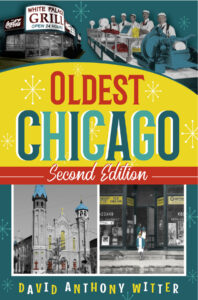 David Witter has been documenting the history of Chicago for over 30 years, and now the Second Edition of his best-selling book Oldest Chicago, has arrived, updated with 50% new material in addition to all the information included from the out-of-print First Edition.

He was kind enough to answer my questions about what makes Chicago so special and why its firsts are so important to both the city’s history and its contemporary life.

SPLASH: What do you think is the greatest unsung hidden gem among these Chicago firsts, the ones locals and tourists alike should attempt to visit more than they already do? 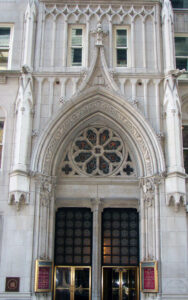 WITTER:  Perhaps the easiest firsts to miss, the “hidden gems” so to speak are almost literally hidden. They include the Oldest Church, which is the First United Methodist Church at 77 W. Walton.

It was founded in 1831, six years before the city was incorporated. The Methodist Riders tried to reform the trappers on Wolf Point, a rough group of whiskey drinkers and fighters. It was not successful but they did start a church across the river. The existing structure was dedicated in 1924. It is located on Washington and Wabash. A narrow, gothic structure it is literally hidden between all the other large buildings and the Miro Sculpture, which sits in a plaza nearby.

But inside are spectacular stained-glass windows, often ten feet high, which tell in visual sequence stories from the Bible as well as a visual representation in glass of the settling of early Chicago. 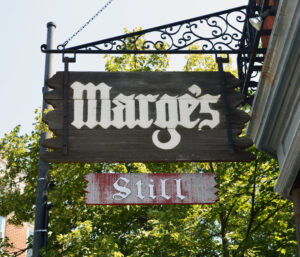 Also, the Oldest Bar, Marge’s Still, at 1758 N. Sedgwick, is also literally hidden amongst the narrow, and dead-ended streets of the Old Town Triangle area. I grew up in the next neighborhood over and played soccer as a child at the Menomonee Boys Club a block away. I still have trouble finding it. That is probably why it survived Prohibition. The cops couldn’t find it either.

SPLASH: Are there discernable patterns to Chicago firsts that you can see?  What does it tell us about this city?

WITTER: There are definitely patterns to how the “firsts” are established. They often go by ethnicity. The Oldest Bar, Marge’s (1885,) and the Oldest Liquor Distributor, The House of Glunz, (1888), are both establishments that deal in beer, which is a big part of German culture. Both of them are in the Old Town neighborhood, which was the settled by the Germans, who started coming in the late 1840’s. 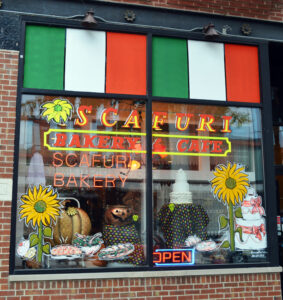 The three Oldest Bakeries, Scafuri, (1904) Ferrara (1908) and Pompei (1909) are all in the Taylor Street, Little Italy neighborhood. Italians began immigrating to Chicago in the 1890’s. This is not always the case but you can see the pattern, telling us that Chicago was settled by immigrants who came in waves and then adapted neighborhoods to their own cultures and tastes. These businesses are the remainders of what used to be more of a city of clearly defined ethnic neighborhoods.

SPLASH: What is the most important first, to you.  Did you feel that way before you researched the book, or did it pop out at you as you were writing?

WITTER: The most important “oldest” is probably the Oldest House, The Noble Seymour Crippen House, 1833. There was a dispute as to which was the Oldest House. For many years the city listed it as the Clark House, (1837). That was located within the original city limits, just south of what is now downtown. The Noble House is located in the city’s far Northwest Side in Norwood Park, which was not part of the original city. The city claimed, for a while, that the Clark House was the oldest because it was within the original city limits. But members of the Norwood Park Historical Society argued that it was the true oldest house. They documented it, but I think the book gave the hypothesis more support. 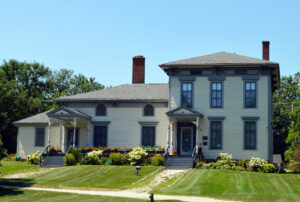 SPLASH: What gave you the idea to do this book in the first place?

WITTER: This is the second edition. I got the idea for the first edition in 2006. I wrote a story for New City Magazine about the closing of the Berghoff Restaurant. People were lining up for hours every day to eat there, lamenting on its closing. So I listed a number of similar old Chicago bars and restaurants that were kind of old “institutions” like Schaller’s Pump, (1882) and Daley’s Restaurant, (1889). The response was great. I got emails and letters asking about other places, so I decided to expand it: Oldest Park, Oldest Statue, Oldest Library, Oldest Italian Restaurant, Oldest Chinese Restaurant. It was published by Lake Claremont Press, who published a lot of great books on Chicago.

SPLASH: There have been exceptional books written about Chicago history already.  How do you think you’re adding to the dialogue with this book? 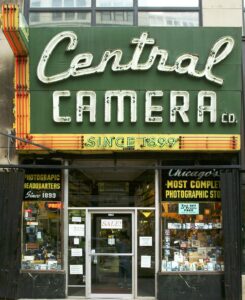 WITTER: There are many great books that are far more scholarly and, in some ways, important. But besides being a fun book that puts history in an easy to read form I personally interviewed about half of the subjects. Obviously, I couldn’t interview the “Oldest Statue” but I did record a lot of first-hand accounts of businesses, many of which have been in the same family for generations. Sort of an oral history in their own words, in a smaller way like the great books of Chicago legend Studs Terkel. For instance, the Jaeger family of the Jaeger Funeral Home (1858) now in its fifth generation. Mr. Jaeger talked about how his grandfather was 6’5” and would drive up and down the streets in a black, horse drawn hearse-wagon, dressed in a black top hat—an imposing figure.

SPLASH:  What’s been updated for this second edition of the book? 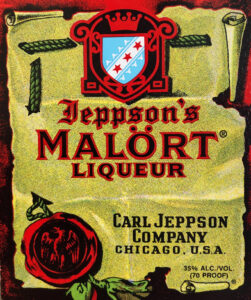 WITTER: Almost half of the entries, about 28 out of 65 are new. Any professional wishes they could go back and make changes after almost anything is done. Some places like The Village Tavern, the Oldest Bar in Illinois, (1847) I found out about after I wrote the first book. The same with the cities’ Oldest Cafeteria, Valois (1921). That became famous once Obama became president, as he often went there. The Oldest Bar used to be Schaller’s Pump, (1882) but that closed so I naturally had to replace it with Marge’s (1885). The 400 Theatre was closed for remodeling when I wrote the first book, but it since reopened so it got its spot. Jeppson’s Mallort, the city’s oldest liquor, was made in Florida but it was bought by a local company

SPLASH:  What do you want to talk about, that I’ve forgotten to ask?

WITTER: The important take away from this book should be to support your local, small, mom and pop businesses. This is even more important due to the pandemic. So many businesses are closing. Do we want to have our shopping choices narrowed down to Target and Walmart? Driving through America’s highways we often have about five dining choices—the three big hamburger chains, two chicken, one taco, maybe a few more. People who move away yearn for an Italian beef, a deep-dish pizza, a Chicago hot dog, a Chicago tamale. Many of their stories are based on the city’s long ethnic history. They make Chicago the unique place that it is. Don’t let it disappear.

Oldest Chicago, 2nd Edition is available wherever books are sold. 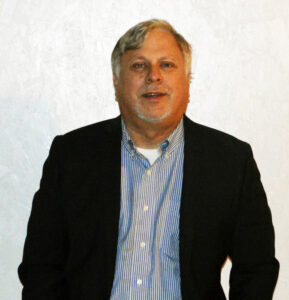 An author, journalist, teacher, lecturer, and historian, David Anthony Witter has been documenting Chicago’s history and neighborhoods for over thirty years. His books include Oldest Chicago; Chicago Magic, A History of Stagecraft and Spectacle; and Be-Bop, Swing and Bella Musica. His historical articles and photographs have appeared in The Chicago Reader, New City, The Chicago Tribune, The Washington Post, Living Blues, The Copley News Syndicate, and many other publications. Witter has also added to his feel and appreciation for Chicago’s history and culture through playing blues at local venues.

September 19, 2018 Eucarol Juarez Restaurant Reviews 0
For me, Oktoberfest is one of the festivities that not only celebrates German tradition but also is a reminder that fall is just around the corner. Hofbrauhaus Chicago kicked off its 6th annual Oktoberfest celebration […]

July 11, 2017 Jessie Bond Entertainment 0
On Saturday, July 9, 2017, Nothing Without a Company presented the first in a series of annual fundraisers, New Play Festival: 4PLAYs, at Mary’s Attic in Andersonville. Also featuring silent auctions, raffle prizes, and a […]

October 24, 2019 Eileen Shapiro Finance & Business 0
Sarah Thompson, an innovative and inspirational technologist, is the Chief Product Officer of Siemly LLC, with over 17 years experience in the legal technology field. Her career has included leadership positions at LexisNexis, iConect, Dataflight, […]